TempO and PreO successes for the Leitch family

Kenny and Matt Leitch earned podium places for their performances in this precision form of orienteering.

Many SO juniors on the JK relay podium

With Easter eggs being awarded to members of the first six junior relay teams there was much munching of chocolate going on in the club tent. The best performance was from our mini relay team of Heather High, Kieran Fitzpatrick and Ella Boyle who finished second in their race.

Many congratulations to Mike for winning the M85 category at the JK. Joining him on podium were Stan and Tommy Heap who both got Silver medals for their performances in M16 and M12 respectively.

Here are some photos of later starting Southdowns Orienteers and some others competing today in Ambersham:

Tommy takes the plaudits on Day 2 of the JK

Following in his brother’s footsteps Tommy Heap leads the M12 forest stage of the JK after the middle race. Can he hold on during Sunday’s long race to take the JK title? Also holding a podium position overnight is Mike Gammon in M85. Results at http://www.sportident.co.uk/results/2017/JK2017/Day2/stage2_index.html 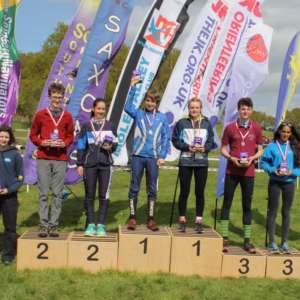 Those hours spent drawing up an orienteering map of Brunel based on street maps and aerial photographs paid off as Stan was crowned M16 JK Sprint Champion. He was joined on the top of the podium by Club Captain Neil Crickmore in his first year as an M55. Results can be found at http://www.sportident.co.uk/results/2017/JK2017/

Another order for SO club jackets will be made next week (12th April 2017).

Scarlet Heap, Stan Heap and Chris Hooker were part of the victorious England team at Interland in Belgium at the weekend.

All SO Juniors are invited to attend this Saturday’s session at Borde Hill which takes place ahead of Easter’s JK.

Jack Leitch and Ali Masson were part of the winning Edinburgh University relay team that helped them retain the inter-University title over the weekend. Jonathan Crickmore running for Herriot Watt ran the fastest relay lap of the day to bring his University into third and also won the individual race on the Saturday, with Jack and Ali in 8th and 10th respectively.

Contactless punching will be used, alongside conventional punching, at all the 2017 SO Summer Park-O events.

Against all the odds SO overcame hot favorites HH on their home terrain to progress to the final of the national interclub competition. Results at: http://www.herts-orienteering.club/uploads/results/2017/2017_03_19_ashridge/stage1_team_compass_sport_cup.html

The British Sprint squad (including Jonny Crickmore) have been in Italy training and trialing new sprint formats. A video showing one of the finals can be found at https://www.youtube.com/watch?v=A4gt5rytJF4

CompassSport entries have now closed and the next deadline is Saturday 18th March for the JK Relays. Please use the Doodle poll for members to indicate your availability, further details below.

Jim Parker has booked ahead and organised the annual Club Dinner for 7pm on Saturday 18th March at the Sportsman Inn, Goddards Green. Please contact Jim if you would like to join us and advise your menu choices from those listed below.