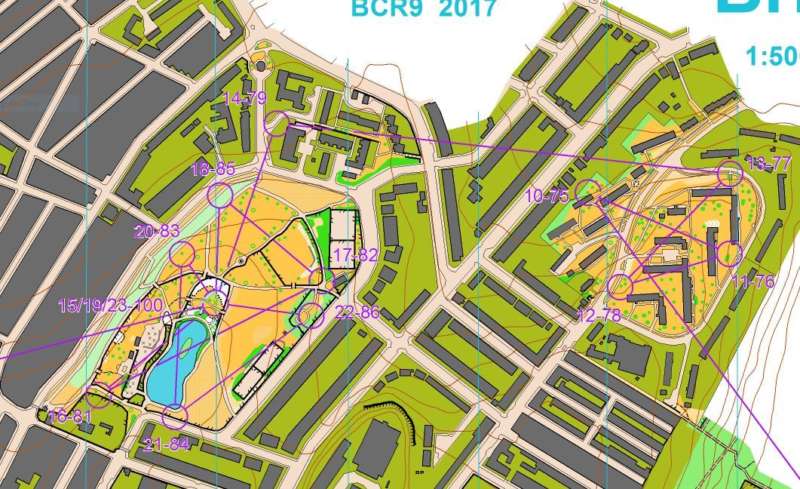 Part of course 1 including butterflies in Queens Park

Come Christmas I start to think about what to do with next year's Brighton City Race. Last year, BCR regular Gavin Clegg suggested that the Marina would be fun. I put together a base map and started to play with courses but it was simply too far away from the city centre (with some uninteresting terrain in between). However that base map had a couple of potentially interesting estates on which I went to have a look at and seemed to have potential. After my first visit the problem was how to join them all together since I hadn't spotted that woodland path. When I noticed the path on an OS map it all fitted together quite well (although that path caused much discussion when drawing up the risk assessment). I wanted to take you all back to Queen's Park and finish not too far from the centre, but also fancied some early legs along the beach. Unfortunately only course 1 could be planned to take in the beach, the two estates and Queen's Park in the way that I wanted. Course 2 was OK but had less toing and froing in the estates and parks. I couldn't get courses 3 and 4 along the beach but found a reasonable alternative through Kemp Town. Course 5 took a more direct route through Kemp Town to the the Park. My planning philosophy (for course 1) was:

a) Make you decide whether to risk the pebbles all the way, carry on to the next railway crossing, or cut back to the closest one.

b) Provide a long route-choice leg into the estate where looking at the contours (steepness of road) and final attack would be important.

c) Provide short route-choice legs within the estates, often 50:50 choices but designed to disorientate you.

d) In the park have the different courses visiting the controls in different orders to try and create a chaotic mass of people running all over the place.

e) A route choice leg out of the park and then a little navigation leg just to give head to head runners the chance to separate.

f) An eyeballs out run to the finish (if only there had been less members of the public out and about).

The supersprint was a late addition in case people felt cheated by missing out on the Lanes experience. Hopefully it wasn't too far for tired legs. The controls in the Lanes were enabled for contactless punching although I gather that not everyone that did it went though a check box to turn their SIAC on.

Next year is the 10th City Race, I've had an idea up my sleeve for a couple of years which I think I'll finally use next year.

Hello One and All

Thanks for your help at the Brighton City Race.

It's probably the event with the most associated risk, so I'm especially grateful to you all for your contributions in mitigating this. From the management of the SI and bib distribution to marshalling, planning and risk assessments, it's all important in us knowing that people will be as safe as possible. Thirty-six hours on and we haven' had any reports of issues from the police, council or public this year so hopefully the event has been incident free - which is great.

Next year is the 10th Brighton City Race. We seem to have access to more rooms at the school now so I will advertise early and perhaps the numbers will grow even further. The 2018 event on 22 December will visit all of Brighton's iconic attractions, so definitely one to look forward to.

Thanks again, and best wishes for a Happy Christmas
Rob

The 9th annual evening urban orienteering event around the streets of Brighton. This year, the event explores new areas of map in the east of the city as well as the traditional seafront and city centre sections. As well as a full range of adult age class courses, there is a junior event run entirely within the Brighton Lanes.